Tom Hirata is the Client Service Specialist at the Fort Wayne Ballroom Company. He is a DVIDA Certified Instructor.

Tom has been dancing since his early twenties, studying ballet and jazz. He began dancing International Standard and the Hustle in his mid twenties. After a twenty year break, he began dancing again. He studied Latin with Terry and Rozana Sweeny, International Ballroom with Christine Zona. He has also studied Salsa and West Coast Swing. His favorite club dances are the Hustle and Salsa.

A student and competitor, Tom enjoys dancing Smooth, Ballroom, Rhythm and club styles. Tom studies mainly with Kelly Bartlett-Spalding and Christopher Spalding. He and his wife Kenna Jackson are preparing for the 2017 USA Dancesport National Amateur Championships. They will compete in Rhythm and Smooth in two age categories (Senior II & III) and two levels (Novice and Prechamp). 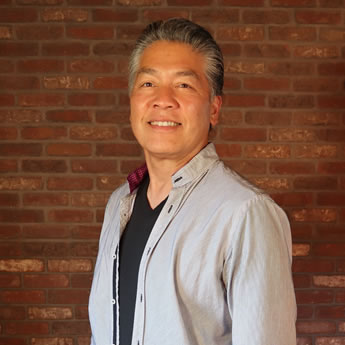